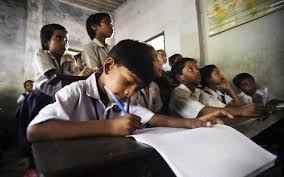 In the past few years, India has made significant progress in getting children enrolled in schools. Of the 200 million odd children in the age group 6-14, about 93% are en olled in some form of formal or non-formal schooling. In spite of the rise in enrolment, dropout rates continue to be very high. The dropout rate in government schools between grades I to VIII is as high as 52%. Attendance rates are also fairly poor – recent statistics indicate the average student attendance rate to be about 75%.

Why this poor quality?

The major reasons for the poor quality  of education are:  (i) Overcrowded classrooms:  Though the average Student Classroom Ratio (SCR)  at the  national level is around 40:1, it is  as high as 84:1 in some states like Bihar. As per a recent  assessment done at the national  level, there is a gap of 998,000  classrooms as of September 2005.  (ii) Lack of physical facilities: Of the 890,000 odd primary schools in  the country, 16% are without drinking water and 51% are without a toilet. 7% of the  schools do not even have a functional blackboard. (i i) Shortage of teachers: Data as of  September 2005  indicates that in  18% of the government primary schools and 7% upper primary schools, the Pupil Teacher Ratio  (PTR) is more than 70. As many  as 14% government primary schools and 3% upper primary  schools are single teacher schools.  (iv) Untrained or inadequately trained teachers: 32% of the 2.7 million government primary teachers and  29% of the 1.4 million government  upper primary teachers are without pre-service training. (v) Monotonous teaching learning   process  (vi) Lack of accountability in the
education system

for improving quality  Effective use of educational technologies can help to address some of the above issues – especially the issues related to teacher availability, competency and support,which are so central to interactive teaching and learning processes.  Information and communication technologies (ICT) facilitate dialogue,  interactivity, speed and access to  information sharing at lower costs and are crucial for connecting people for a better world.  Children of this generation are exposed to new technologies at an early stage. Therefore, the way they  see, perceive and know is multidimensional: the way they process  and receive knowledge too is varied  and multi layered. Thus, there is an emerging need for multi channel  learning approaches, with intelligent combinations of face-to-face  instruction, technology-mediated applications, more systematically designed print materials and other non-traditional educational resources.  Unfortunately, education  technologies is often looked upon as only computers and the Internet,  ignoring a host of other technologies that are available. Ideally, education technologies should include all  components of the information technology used in the delivery  of education. Radio is easily available across large  parts of the country including remote areas and can be very effective in awareness building, information  dissemination, teacher training and  guiding classroom activities. Television also has substantial  penetration in rural India including many schools; along with a Video  Cassette Player, this can be a useful educational resource to a school. It  helps in self-learning and in keeping children engaged.  Satellite communications technology

distances even in the most remote corners of the country. Through audio and video interconnectivity it is now possible to recreate a virtual  classroom scenario in a distant mode. Even a technology like the telephone,  which now has an extensive coverage in rural areas, can be used for  providing dial-in services and answering educational queries – such  services are presently prevalent in urban areas during examination time.  Access to computers and the Internet has brought about a knowledge  revolution. These technologies are a great resource to the students as  well as the teachers. With the introduction of Computer Aided Education, the teachers no longer  have to depend on a single source of information, typically a textbook,  but are exposed to opportunities to use a variety of information sources. Technologies like videoconferencing,  dial-in telephone services, satellitebased communication and the Internet  can also be of great help in training and capacity building of teachers; unlike  the traditional cascade method of teacher training, there is no  transmission loss in this case.

The National Plan of Action (NPA) 2003 of the Government of India on Education For All (EFA) lays  emphasis on an open learning system through a distance education mode  and on computer education at elementary level.  In India, the first school broadcast project was commissioned as early as  1937. There are experiences of fairly successful language learning programmes through radio in  Rajasthan and Madhya Pradesh. The Indira Gandhi National Open University (IGNOU) also has an  educational FM channel named Gyan Vani. Gyan Vani channels are  operating at present in 17 cities and have plans to expand to 40 cities by  2007. IGNOU broadcasts Interactive Radio Counseling programmes every  Sunday for one hour from 186 radio  stations of All India Radio. The Center for Learning Resources also runs  successful radio instruction programmes for schools in Maharashtra, Uttaranchal and Bihar. There has also been a fair amount of  experimentation with distance learning  through television and satellite communications. The Satellite Instruction Television Experiment (SITE), the Kheda Communication Project (KCP), the Jhabua  Development Communication Project (JDCP), the Gramsat Programme (GP),  the Training and Development  Communication Channel (TDCC) and  the INSAT system have been major  efforts in this direction. In September 2004, the government launched ‘Edusat’ or   he education satellite, to provide a boost to the distance mode  of education. Designed and developed by the Indian Space Research Organisation, this is the first  Indian satellite dedicated exclusively to the education sector. Networks based on Edusat are capable of facilitating live lectures/power point  presentations with student interaction, web-based learning, interactive training, virtual laboratory,  video conferencing, etc. The government has also launched a  separate TV channel ‘Gyan Darshan’  exclusively for telecasting educational programmes. In a bid to further  strengthen distance education, the open school system, until recently restricted to the National Institute  of Open Schooling (NIOS), has now been strengthened through the establishment of State  Open Schools. With respect to computer education at the elementary level, the government  envisages a three-stage approach.   he first stage would be computer literacy, the second stage would be computer-aided learning and the  third stage would be computer based learning, according to the  manifesto of the Indian Government. To provide for infrastructure and content  development, financial provisions have been made under the Sarva Siksha  Abhiyan (SSA) scheme whereby each district is provided with a  minimum of INR 1.5 million per year for computer education. Some of the initial initiatives in Computer Aided Education taken up under SSA by states like Assam and Orissa has shown positive results in terms of teacher empowerment and improving learning levels among students. A major initiative in computer aided  learning (CAL) named ‘Headstart’ was undertaken in Madhya Pradesh under  the District Primary Education Programme (and continued  under SSA) and has yielded encouraging results. Apart from government efforts, there  has been a number of nongovernment and corporate initiatives  in recent years with respect to computer education and computeraided learning. Most of the private schools in the urban areas today have computer literacy classes at the  elementary level and some of them make effective use of computers and  the Internet for learning.

Challenges
Notwithstanding the efforts described above, the challenges to the effective utilisation of education technologies are serious: (i) Availability of computer ardware- about 8% elementary  schools have computers
(ii) Potentials of satellite technology not harnessed adequately  (iii) Inadequacy of quality educational content  (iv) Inadequate teacher capacity to transfer technology into  educational gains Lack of a comprehensive policy  on education technology at the national level has resulted in a  piecemeal approach towards education technologies.  The possibilities and benefits of the various technologies and the  ways in which they can help in improving the quality of education have not been realised to the fullest.  In the coming years, QUEST (see the  box) will attempt to consolidate the learning outcomes of the numerous
experiments and pilots across the  country and arrive at a shared understanding of the cost effectiveness and applicability of  each technology. It would also
attempt to put in place a system of  assessing and evaluating digital educational content and come up  with guidelines on instructional design. It is hoped that the T4 and  QUEST activities will continue to provide models that can be scaled
up through government funding along with contributing to the  development of a comprehensive policy on education technology at  the national level.