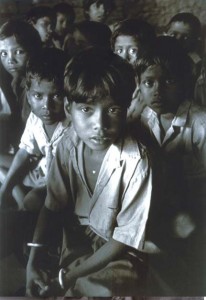 Seva Mandir, an NGO working in 161 villages of Udaipur and Rajsamand districts of Rajasthan, India,  has initiated an interesting experiment to reduce teacher absenteeism using a camera to record the presence and attendence of teachers in  the classrooms which determined the teachers a pay, the organisation not only reduced teachers absenteeism but also improved students performance. This  article discusses in detail this experiment towards improving the quality of education for children, especially those marginalised by the mainstream education system

Context of Udaipur region
Udaipur region of Southern Rajasthan in India is mostly hilly, with large parts of the hills now being barren. The natural resource base is highly  degraded consisting of agricultural land, forests, pasturelands and wastelands. Most of the land is owned by the Government and are  degraded and poorly managed. Due to the inadequacy of the natural  resource base in providing ample livelihood options, most families  engage in physical labour outside  their villages. The local population also fares poorly on indicators of  health and education.

Background of Seva Mandir’s education programme
Seva Mandir started its work in the 60s with adult education. Over the time, the focus of Seva Mandir’s education programme shifted to  children’s education, especially for  those marginalised by the mainstream education system. As part of this, it is running 174 rural schools. An  evaluation of these schools done in 1995-97 showed that the schools were not faring very well on children’s learning abilities. The main reasons for that were related to the  teachers’ own academic competencies and the  pedagogy they used in the classroom.

For the last 6-7 years, Seva Mandir  has invested a lot to enhance the teachers’ own abilities and their understanding of children’s learning  processes. This has led to improvement of the teacher’s abilities and motivation thereby impacting  positively the children’s learning and enrolment. Some meaningful partnerships have been forged with  external agencies for this work, like the Vidya Bhavan Society.

Objectives of Seva Mandir’s education programme •
Provide quality education, to  enable children in the age group of 6 to 14 years who are deprived of education to independently  read and write with comprehension  • Create spaces which allow people to recognise and articulate the need for an alternative, higher  quality and more meaningful form of education Why the camera experiment?  As said above, by and large the teachers are fairly motivated and the    children in these schools are also doing well in their studies. Yet, in  these schools also teacher absenteeism has been a concern.

Teachers often would not come to  school without giving any prior information. The organisation  therefore was looking for ways to reduce this absenteeism, looking for  ways, which would not increase patronage between the monitor and  the teacher. It was in this context that the idea of using a camera came from  Prof. Esther Duflo of Massachusettes Institute of Technology (MIT). Seva   Mandir had an old relationship with MIT and it decided to conduct an experiment to see the impact of cameras on teacher presence. About the experiment
120 schools were selected to  participate in the study, of which the camera was given to 60 randomly selected schools (the “programme  schools”). The pictures taken at the start and end of each working day were used for determining teacher attendance, and thus determining teacher pay.

The monthly base salary was set at INR 1,000 for 21 days of  work in a month. Teachers received a bonus or a fine (INR 50 per day) for  days more or less than the number of  “valid” days where they actually attended. A “valid” day was defined  by a day where the opening and closing pictures were separated by at least five hours and the number of children in both pictures was sufficient to indicate that children were present (at least eight).

The fine was capped at INR 500; hence, a teacher’s salary could range from INR  500 to INR 1,300. In the remaining 60 “comparison” schools, teachers were paid INR 1,000, and were told as usual that they could be dismissed for poor performance. The payments were made on a bi-monthly basis. Each school in both the treatment and the control categories received one unannounced visit per month (“random check”). The enumerator noted whether the school was open or closed, how many children were in class  at the time of the visit, and what the children and the teacher were doing.  In collaboration with Seva Mandir, the evaluation team (MIT and Vidya Bhavan)  conducted three exams, in August 2003 (at the start of  the programme), April 2004, and September 2004.

The tests covered basic Hindi and   ath competencies. The first test followed the usual methodology: children were  given either a written exam (for those who could write) or  an oral exam (for those who could not write). For the post-test and the mid-test,  both the oral and written  exam was administered to all children. Children who were unable to  write received a zero score for the written sections.

Results of the experiment
Prior to the programme, school and teacher quality was similar for the programme and comparison schools.  Before the programme wasannounced, the attendance rate was  66 per cent and 63 per cent,   respectively. However, this threepercentage  point difference is not significant.  Other measured aspects of school quality were also similar (number of students present at the time of visit, infrastructure, teacher  qualification).

Student academic performance was similar across the programme and  Camera was given to 60 randomly  selected programme schools. The pictures taken at the start and end  of each working day were used for determining teacher attendance, and thus determining teacher pay.  comparison schools prior to the programme. A pre-test exam was administered to the 2,230 students   enrolled in all 120 non-formal  education centres in September 2003. In the pre-test, 17 per cent of children  in the treatment schools and 19 per cent in the comparison schools took  the written exam (the difference is not significant).

Teacher absence and teaching
activity The impact of the incentive  programme on absence was large and immediate, as measured by randomcheck data. In September 2003  teacher attendance increased relative to August in programme schools, and decreased in comparison schools. Between September 2003 and October 2004, teacher absence was, on an average, 18-percentage points lower in the programme schools than in the comparison schools. Thus, the  programme halved absence rates in treatment schools.

This reduction in  absence is due to both, some teachers starting to attend work all the time  and to a complete elimination of entirely delinquent teachers those  who come less than half the time. Subsequent to the implementation of  the programme, the total number ofchildren found in open  schools did not differ between programme and  comparison schools. Effects on learning
Children in treatment schools got an average 30 per cent more instruction time than children in comparison schools. Did this result show an  increase in test scores? To minimise the impact of attrition of  children on the study, considerable attempts were made to track  down children who were not present at the mid- and posttest, and to administer the post-test to them. In total, out of the 2,230 students who took the pre-test, 1,893 took the mid-test, and 1,760  took the post-test.

The test data reveal that the programme had a significant impact on learning, even as soon as the mid-test is over. In the mid-test, children in treatment schools gained  0.11 standard deviations of the test score distribution in language, 0.15 standard  deviations in math, and 0.17 overall. Children with higher  initial education levels gained the most from the programme: children who  took the written pre-test have test scores that are 0.25 standard deviation higher in programme schools than in comparison schools at the mid-test.  Overall, after one year in the  programme, children  learned  significantly more in treatment  schools than in comparison schools.

In the post-test, children in treatment schools gained 0.15 standard deviations of the test score distribution in language, 0.16 standard  deviations in math, and 0.17 overall. As in the mid-test, most of the gains in learning levels can be attributed  to children with higher initial education levels. It can be said at last that the  monitoring system through cameras linked with financial systems helped reduce absenteeism in Seva Mandir  schools.

This point is important that in Seva Mandir’s case, it led to  improvement in learning levels. Even  in programme schools, if there had been no efforts at improving quality  across the schools, it is not very sure if increased presence of the teachers  would have led to increased learning The monitoring system through cameras linked with financial system  helped reduced absenteeism in Seva Mandir Schools. It led to improvement in learning levels too levels of the children.

Also, the fact that the system of using photographs to calculate payments was rigorously used helped instill the teachers’ faith in the system. If the system had been misused to tamper payments, there is  no certainty if the teachers’ would have cooperated in letting the  experiment go on. In the above experience, “quality education” has many components, of which  teacher presence is only one. The camera project has helped establish the fact that teacher absenteeism can be reduced using  creative methods.