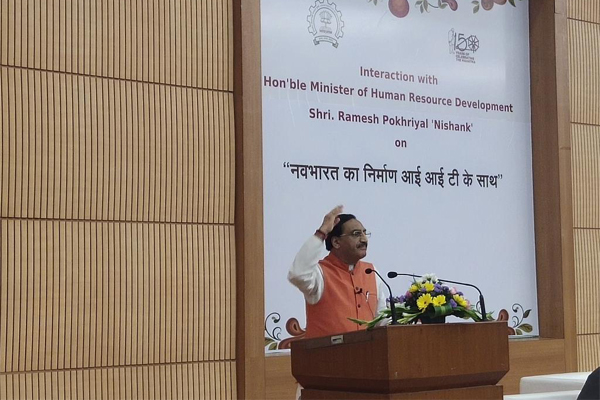 Union HRD Minister Ramesh Pokhriyal Nishank emphasised on the importance of the role played by the IITs in establishing India as the world leader in education in the next five years.

Addressing the 57th convocation of the IIT Bombay recently, Pokhriyal highlighted that under the leadership of Prime Minister Narendra Modi, India will be established as the world leader in education by 2024. “The IITs have an important role to play in the realisation of this goal,” he said.

Pohkriyal congratulated IIT Bombay for bagging a rank among the top 200 in the QS world university rankings and asked the community to aim higher.

“IIT Bombay can render a significant contribution in addressing the challenges of climate change and in fulfilling development goals such as increasing India’s renewable energy capacity,” he said.

The minister also highlighted the fact that programs such as ‘Make in India’, ‘Standup India’, ‘Startup India’ and ‘Digital India’ are such transformative schemes of the era that has enabled India to become the world’s most sought after investment destination. He also threw light on various more initiatives by the government in transforming the field of education.

The minister urged the students to plant a sapling on their birthdays every year and to conserve water.

On this occasion, the minister inaugurated Hostel No. 18 and also planted a tree on the IIT Bombay campus.

Earlier in the day, he also addressed a live interaction via National Knowledge Network, with the students of all IITs on the topic of ‘Navbharat ka Nirman IITs ke Sath’.

While he recalled the contributions of ancient India in the fields of medicine, mathematics and nuclear science, he said “India has had a legacy of providing leadership to the world in the sphere of knowledge and science. IIT students need to ensure that India continues to play this leadership role”.

On this occasion, Nandan Nilekani, Co-founder and Chairman, Infosys Technologies Limited, was awarded the degree of Doctor of Science (Honoris Causa), and former UIDAI chairman for his outstanding contribution as an industrialist and offering support for social development through technology.

Nilekani spoke on the occasion about his experience in building Infosys and later on the Aadhaar project. He spoke of how large scale development problems can be addressed using technology.