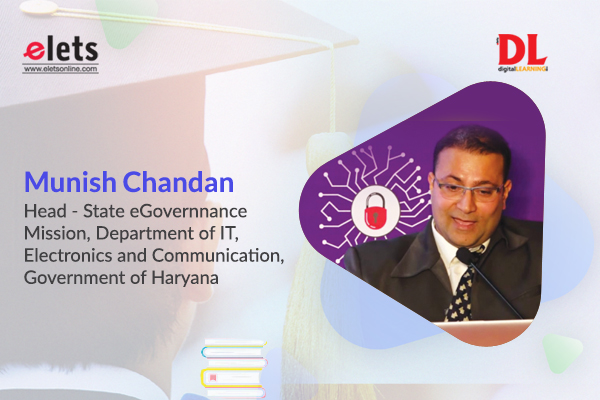 The nationwide lockdowns imposed due to the COVID pandemic brought forth multifold challenges for the state governments and the citizens. Munish Chandan, Head – State eGovernnance Mission, Department of IT, Electronics and Communication, Government of Haryana, while addressing the Education Innovation Summit, highlighted how the Government of Haryana leveraged IT solutions to overcome the challenges and ensure a smooth delivery of services to the citizens.

When the lockdowns were imposed, the only sector that was functional was the government sector, especially the IT department. The government was tirelessly working day and night to ensure that services are delivered seamlessly to the last citizen.

Speaking of innovative measures taken by the Government of Haryana, Chandan said, “As soon as the lockdowns were announced, we started a ‘Sangharsh Senani’ concept. The Chief Minister came up with the idea that the government could call for volunteers – Sangharsh Senanisto help the people as well as the government. For this, we invited applications from people from numerous domains including doctors, nurses, grocery store owners, etc. and their availability was informed to the district officers, deputy commissioners and the Chief Minister’s Office (CMO). Within three days of the launch of the online portal for Sangharsh Senani, we received nearly 60,000-70,000 people who volunteered. In the later phase, during the second wave, we utilised this portal to rope in people who had recovered from COVID and were ready to donate their blood plasma.” All the efforts made by the government were to facilitate the citizens and ensure that none of them face any issues due to the lockdowns, he added.

Another innovative step that the Government of Haryana took was the launch of the Aatmanirbhar Portal. Previously, this was launched as Bank slot & Bank cash delivery at home portal – an initiative of the Finance department. Lockdown posed as a challenge for the people to reach out to their nearest banks and withdraw cash for their everyday needs. Therefore, through this portal people could book a slot at their nearest bank within 15 minutes. For small banks, five slots were earmarked in a day while for medium banks eight slots, and 10-12 slots for large banks. People were allowed to book a slot. Once a citizen books a slot, an e-pass is generated. The concerned person can show that at the branch and utilise the slot for the banking operations.

Further, he said, “Also, we started a unique concept of ‘Cash Delivery at Home’ with the Department of Posts. Under this, a postman could deliver a cash sum up to Rs 10,000 to the people at their doorstep. This was one-of-a-kind initiative, where the postman within a time frame of one working day could reach to any person residing in the state and deliver the cash amount. Later on, the Finance department introduced interest on pension scheme on this portal and renamed it as the Aatmnirbhar Portal.” All these initiatives are live at present and are available at atmanirbhar.haryana.gov.in, he added.

The state government also came up with the Covid Sample portal and roped in all the government and private laboratories. The labs were asked to enter and update the details of the COVID patients on their health status and condition. As per the details, SMS and alerts were sent to the district administration and CMO along with the concerned person. Further, based on the alerts, actions were taken if there is a need to declare an area a containment zone or a buffer zone, or in case the person needs to be home isolated.

Apart from these initiatives, the government also came up with Healthy Haryana portal. Chandan said, “The Healthy Haryana portal was launched alongside its mobile application. This was an effective search engine designed to carry out surveys and identify the COVID hotspots. Through this, as many as seven lakh families were surveyed and COVID patients were identified and further actions were taken based on the data collected. The survey also came in handy to detect people with co-morbidities.

In an effort to prevent overcrowding at the mandis, the government prepared schedules for the farmers and asked them to visit the mandis accordingly to sell their farm produce. The schedules were handed over to the farmers beforehand and based on that the mandis operated while keeping social distancing in check.

“Introduction of internet in learning was a pivotal moment”

Technology: the pen and paper of our times