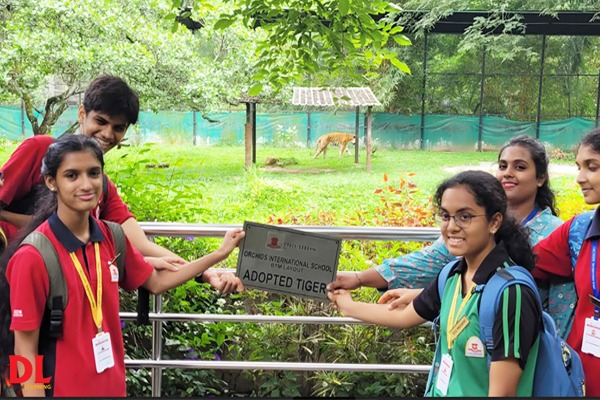 Students of Orchids – The International School (OIS), BTM Layout, Bangalore, one of the leading K12 chain of CBSE schools, have adopted an 8-year-old Bengal Tiger named Mithun, from the Bannerghatta Zoo, Bangalore to spread awareness regarding Tiger conservation in India. Orchids – The International school always encourages their students to become responsible citizens and make an impact on the environment.

The students at the school believe that the tiger is not only our national animal but a symbol of the ecosystem, and the tiger is the pride of our country and we must save tigers.

Feeling proud & overjoyed about this announcement, Ms. Manjula B, Principal of Orchids – The International School, BTM Layout branch said, “We are extremely ecstatic to share that our students took this novel initiative to support ‘Project Tiger ‘by adopting Mithun. Right from conceptualising to collecting funds, everything was done by our students. We supported them wholeheartedly. I hope we can take more such initiatives in the future and inspire other schools and branches to come forward and work towards wildlife conservation in the country and help in saving more such endangered animals.”

The officer in charge, Mr. Harish Deputy Director (DD) and Mr. Santhosh, Public Relations Officer (PRO) of Bannerghatta Zoo were present at the occasion and appreciated the initiative taken by the students’.

Details of the adopted Tiger:

Grade of the participating students: all grades

India has 70 percent of the world’s tiger population. In 1973, the Government of India (GOI) declared the Tiger as India’s national animal. Hunting of Tigers in India was banned and strict punishments were announced against anybody defying the rules. GOI also set up a conservation scheme called Project Tiger. As per the 4th All India Tiger Estimation (AITE), there are 2967 tigers in India.