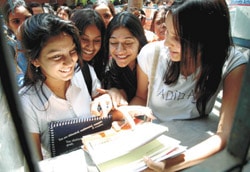 New Delhi: The Delhi University sold over 42,000 forms on the first day of the admission process and nearly 7,000 students registered online . Last year, approximately 30,000 forms were sold on the the first day.

The rush began early in the morning where thousands of students, accompanied by parents, queued up at the 18 colleges where the forms were being sold and submitted.