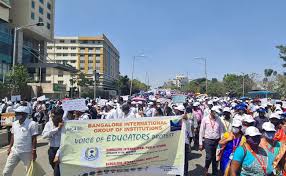 Thousands of teachers and staff from various private schools in Karnataka marched under the auspices of the Leaders, Teachers and Non-Teachers of Private Schools Coordinating Committee (KPMTCC) in Bengaluru in a massive protest Tuesday against the Karnataka state government.

The protesters demanded that the drastic 30% reduction in tuition fees ordered by the State Department of Elementary and Secondary Education be withdrawn.

While the state government order was issued with parents’ financial hardships in mind, school administrators say that with the steep reduction in tuition rates, they can no longer pay their employees.

Some private school administrations have already approached the Karnataka High Court on this matter. A delegation from the school administration also met with the Minister of Health and Medical Education, Dr. K Sudhakar, to reduce the fees to 15%. They also applied for government grants to help them stay afloat.