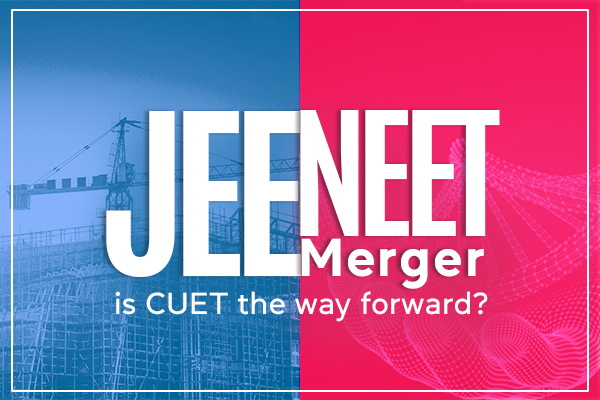 The University Grants Commission proposed to combine the National Eligibility Entrance Test (NEET) and Joint Engineering Entrance (JEE) into CUET (Combine Undergraduate Entrance Test). According to the UGC chairperson and a few industry stakeholders, conducting a common entrance test will make the process easy both ways for students and the National Testing Agency (NTA) that conducts all these exams. Sheeba Chauhan of Elets News Network (ENN), elucidated the topic and accentuated the possible challenges and opportunities that will come along if the proposal of the JEE-NEET merger is accepted.

The Combine Undergraduate Entrance Test (CUET) has been creating a lot of buzz all around. And an important question doing the rounds is whether it is really going to give a beneficial edge to the students? The decision is not yet final but is already creating a myriad chaos among the NEET and JEE aspirants. NEET and JEE, the main entrances for medical and engineering respectively, are considered the torch-bearers of students’ future endeavours. Though the government is also not in a rush to jump to any conclusion about this historical decision for students, mere talks have been causing wide ranging views to be shared. The Union Minister of Education and UGC chairperson are also in talks to closely monitor the opportunities that came along with the decision. Even the government is also very pertinent about taking advice from industry stakeholders before making it into a rule. They have formed a committee that will examine the current examination process along with the pros & cons of the proposed CUET. NTA and UGC will only finalise the decision after final approval from the designated committee.

On average, 2.5 million students appear in the JEE & NEET every year. The once-in-a-year entrance exam faces a huge footfall of students; as it is the main exam for NEET to take admissions in MBBS, BDS, while JEE aspirants appear in the exam for taking admissions in IITs, NITs, and IITs depending on their performance in the two rounds(mains & advance).

Both NEET & JEE have physics & chemistry in their syllabus, while the main differentiating factor is Mathematics & Biology. Both are considered to be the toughest exam at the undergraduate level and students prepare for years to crack these exams. Bringing such a huge change into these entrance exams will be a historical decision for medical and engineering aspirants.

Though UGC has already introduced CUET for central and state-level universities, the merger of JEE-NEET was a sudden stroke. According to the UGC chairperson, this will reduce a lot of the burden of logistics on the NTA (National Testing Agency) and will bring an easy process of question paper making also. While the intent may be in the right direction, the sudden onset of the decision has not gone down too well across the participating and affected segments.

There is a mixed reaction to the proposal at the moment. Though few industry leaders are very sure that it will decrease the quality of competition proposed by these exams and that the standards will degrade with the merger.

Looking at the brighter side

The change is always taken with a pinch of salt. Though UGC is proposing CUET to unburden the pressure from the shoulders of students to appear in multiple examinations. It will also be aiding support for the test-conducting agency, NTA. Apart from stressing about unburdening the pressure, it will also be taken into consideration to organise this exam twice a year like many other exams conducted by UGC. A huge bunch of students takes a drop year if they lag to crack the exam, a particular year, organising this exam twice will take provide aspirants with more opportunities and will reduce the mental pressure of time crunch.

As the topic is receiving much attention in the education sector, it is very important to have a look at the opinions & thoughts of the industry on the historical proposal. With regards to the same, Sanjay Padode, Chairman of IFIM Institutions, Founding President Vijay Bhoomi University interacted with Elets technomedia and he said “Admissions have always been faced with the challenge of fair play. To establish equity in the admission process, centralisation of entrance examinations is a convenient route for the establishment. However, equity and fair play is just an illusion. In reality, students who are endowed can buy their way into tuition and coaching classes and attain an unfair advantage over those who are struggling to make ends meet. The centralisation of examinations has fuelled a thriving Rs 25000 crore coaching industry, which is killing the objective of education. Students are ignoring their learnings in school and are focussing only on preparation for entrance examinations. Since entrance examinations test only relevant subjects associated with the degree programs, broad-based education is being compromised and education is now becoming akin to programming human beings. In my view centralising exams is a regressive step in light of the National Education Policy 2020 which advocates multidisciplinary learning, multiple exits, multiple entries, and many more forward-looking concepts. The government must relook at this decision and instead of making one agency as the gatekeeper of education, allow diversity to prevail and permit the higher education establishments to develop their own admission criterion based on one national aptitude test, scores in the Xth and XIIth grade and the overall performance of the student in curricular, co-curricular and extra-curricular activities.”

As the thoughts and vision of an industry person are important, the vision of a person who has followed the same road earlier is as important. In lieu of the same, we interacted with Mandeep Singh Luthra, IIT Kanpur Alumni, Senior Business Consultant, American Express and he said, “College entrances for Engineering and medical aspirants have been evolving for years. Since the golden age of IIT-JEE and PMT, a lot has changed. The earlier times had various exams for different colleges. For example – AIEEE for NITs and AIIMS for selected medical institutions. Then came a big shift and the entire dispersion of Engineering college entrances were merged into JEE Mains & Advance. Similarly, medical colleges saw such a modification in the form of NEET.

But to everyone’s surprise, the announcement was made that there would be a merger of entrances for both engineering and medical. The move brings doubt among IIT alumni like myself and also some repercussions and revolts from students. The fundamental doubt that we all have is how are we going to manage the difference in subjects. As we know Biology and Mathematics are key distinctions between JEE and NEET.

According to some thinkers, they can have a common paper for physics and chemistry, and different sets for mathematics and biology. But this again creates a problem for some, as the level of testing that JEE does in these subjects is very thorough and tough as compared to NEET. Still, there is one fundamental belief that I have in this scenario, no matter what the level of the question paper is, the cut-offs adjust accordingly. This means that tougher questions would drop the mark for medical aspirants. At last, we should all wait to see the final pattern and guidelines, as this is an open ground and the puzzle is being put into its place as we speak.”

Snag in the approach

This year, CUET is being organised for taking admissions in Central, State, and private Universities. The approach evidently was a failure when the exam got cancelled due to technical glitches. The UGC also mentioned that conducting three exams at a time increased the pressure on the NTA in lieu of reducing it. Though the UGC chairperson said they would conduct the next exam with better arrangements at centres to avoid such glitches in the future.

The first edition of CUET glid through the technical glitch and the final decision on UGC’s proposal for the merger of NEET-JEE is still pending. NEET & JEE aspirants are hardly in support of this proposal and some students even took to the roads to protest against it.

The condemnation faced by this proposal among the NEET and JEE aspirants is massive. While some of the leaders support this approach and said it will be an enlightening approach. Earlier, when PMT was changed to NEET and AIEEE was merged as a single JEE (Mains & advance), the reactions were also negative at that time, but eventually, it only proved supportive for the preparation of aspirants.

As, the final decision is yet to be made, drawing any conclusions is not appropriate. We should all wait for UGC’s final decision on the proposal and hope that students’ perspectives and their career are kept as the base foundation for this historical decision.