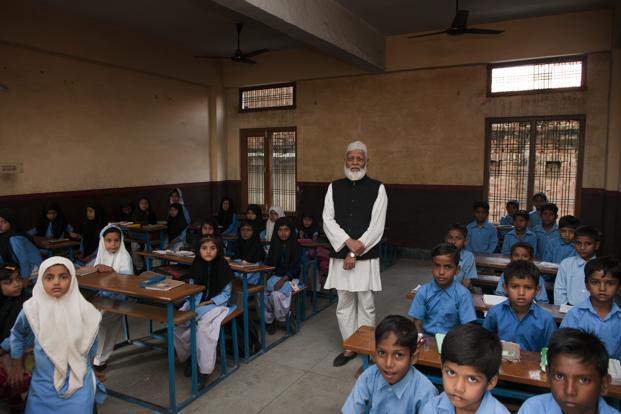 Muslim enrolment in schools witnessed a marginal increase whereas SC/ST community enrolment has slightly declined. However, kids belonging to Other Backward Classes have shown a perceptible increase in school enrolment. As per data of 2013-14 released by HRD minister Smriti Irani, Educational Development Index shows Puducherry at number one spot, followed by Lakshadweep, Tamil Nadu, Himachal Pradesh and New Delhi. Surprisingly, more than 60 percent of enrolment has taken place in government schools inspite of increasing privatisation of school education. 35.81 percent enrolment happened in private managements, 27.8 percent in private unaided schools, a little over 8 percent in private aided schools and over 2 percent in unrecognised schools. Government aided schools with private management were popular in states like Goa (63.03 percent), Kerala (42.36 percent) and Maharashtra (37.8 percent). Data revealed that at primary level, Muslim enrolment increased marginally to 14. 35 percent from 14.20 percent in 2012-13. At the upper primary level, enrolment increased from 12.11 percent last year to 12.52 percent this year. In states like Gujarat, West Bengal and Uttar Pradesh, there has been a gradual increase in enrolment. However, in Uttarakhand, there has been a marginal decline in Muslim enrolment. Girl enrolment has remained unchanged at 49 percent at both primary and upper primary level. OBC enrolment increased to 44.1 percent from 42.9 percent at primary level while enrolment at the upper primary level went up to 44.44 percent from 43.66 percent last year. Significant increase can be witnessed in Kerala, West Bengal and Puducherry. Girls constitute approximately half of enrolment at primary as well as upper primary levels. Enrolment of SC children declined to 19.72 percent from 20.24 percent at both primary and upper primary levels. Marginal decline in SC enrolment has been registered in states like Uttar Pradesh, Bihar, Maharashtra and Madhya Pradesh, excluding Himachal Pradesh and West Bengal. The recent data for 2013-14 also revealed that the percentage of teachers involved in non-teaching assignments to total teachers has declined. 2.48 percent of teachers were not involved in teaching assignment that cost 16 working days. Number of days lost remain unchanged, but percentage of teachers involoved in such work has declined substantially from 5.49 percent from last year.