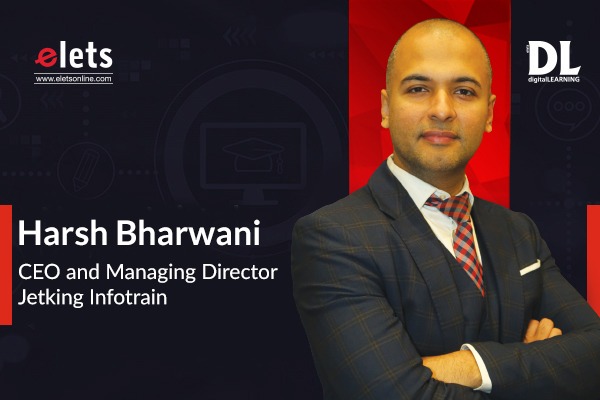 Recent McKinsey research states that there are over 90 use cases for blockchain business applications across industries. Introducing such technology to educational institutions will make the process easy for the administration to keep data safe & secure. Exploring this emerging concept further, Sheeba Chauhan of Elets News Network had an exclusive conversation with Harsh Bharwani, CEO and Managing Director, Jetking Infotrain. Edited excerpts:

How can introduction to blockchain in educational institutes enhance data protection? Will it be able to protect from cyber threats?

One common application of blockchain in education is record keeping. There are essentially infinite student records, and establishing academic qualifications can be time-consuming, requiring extensive paper documentation and case-by-case checking. According to a 2019 study by Credential Engine, there are over 738,000 unique credentials proving to learn, including degrees, certificates, digital badges, and apprenticeships.

When it comes to things like transfers across schools or states, blockchain can eliminate much of the overhead associated with this process and streamline verification procedures, saving educators and administrators time. A college enrolling a transfer student might use blockchain to authenticate their record and the courses they studied with a few simple clicks. The same idea applies to sharing records with an employer.

Why should educational institutions adopt ethical hackers to protect themselves from ransomware??

A digital transcript can be extremely thorough, covering information such as attendance, courses studied, and even the outcomes of specific tests or papers. Those that have access to the student’s transcript, such as other institutions or possible employers, can see how they performed on several examinations. This technology has the potential to be useful not just in higher education, but also in primary and secondary education.

Since the implementation of COVID-19, cybersecurity threats in educational institutions have surged. According to the K-12 Cybersecurity Resource Center, 408 publicly revealed cybersecurity events targeted K-12 schools in 2020 alone, representing an 18 per cent increase over 2019 and the second consecutive annual record. Data breaches accounted for 36 per cent of these occurrences, and while the majority of these affected children, several also compromised teachers’ data.

While the blockchain is erupting as a possible technology to avert cyber threats, Do you think any alternative will induce in the tech industry that can take over blockchain’s prominence in the long run?

Teachers became increasingly susceptible to fraudsters as more online learning platforms were employed during COVID lockdowns. Malware can be found in online textbooks and papers that students and professors download. Others attempt to hack into remote learning sessions in order to disrupt classes and transmit undesirable content.

Before implementing digital tools, school districts should conduct study on them. Third-party software vendor vulnerabilities can jeopardise instructors’ data, therefore schools should ensure that these tools are safe. This involves looking for features such as end-to-end encryption and analysing a company’s history of data breaches.

It is not quite possible to forecast whether cryptocurrencies will grow rapidly in Blockchain 2.0, because corporate leaders and members of the general public may have lingering misgivings that are difficult to overcome. However, we anticipate increased utilisation rates. Furthermore, miners will have more options from which to choose. Although Bitcoin now accounts for roughly 40 to 50 per cent of cryptocurrency market valuation, other cryptocurrencies are gaining popularity. Ethereum, for example, now accounts for over 10 per cent of market capitalisation. Small ICOs (those outside the top 20) now account for roughly 20 per cent of market capitalisation, up from 5 per cent only two years ago.

What are the types of ransomware attacks that majorly happen in educational institutions?

University College London was a well-known victim of the WannaCry ransomware outbreak in 2017, which infected 100,000 systems worldwide in a single weekend, losing access to its shared data repositories and student management system.

Clark County, a 320,000-student school district in Las Vegas, Nevada, became the largest school district to be hit by a ransomware attack since the start of the COVID-19 pandemic on September 28, 2020.

Following a ransomware attack that brought down its websites, email servers, and voicemail systems, Los Angeles Valley College paid over $28,000 to online criminals.

A ransomware attack paralysed the University of Calgary for over a week, and it eventually paid a $20,000 ransom to restore over 100 of its systems.

Do you think technology comes with many drawbacks? What could be possible drawbacks in the use case of blockchain technology in cybersecurity?

Scalability: Blockchains are not as scalable as centralised systems. If the Bitcoin network is used, the transactions are processed in accordance with network congestion. This problem is linked to blockchain network scalability concerns. Simply put, the more people or nodes that join the network, the slower it will be!

The data on blockchain is immutable: Multiple systems benefit with the use of blockchain technology like education, financial systems, supply chain etc. Immutability can only be present if the data has been distributed fairly.

And also once the data has been written it cannot be removed. Hence even if a person wants to delete some information online on blockchain, he will not be able to do so.

What sparked the sudden demand for Cybersecurity professionals?

Employers consider cybersecurity management as vital, and they need seasoned individuals who can hit the ground running. Today’s typical cybersecurity job demands a college degree, which creates a significant barrier to entrance because the school system is not producing enough graduates. In many cases, a college degree is unneeded and is not the ideal approach to prepare for a field in which technology is rapidly evolving. To tackle the skills deficit, training providers and workforce development officials must devise plans and techniques.

Hackers aren’t simply after computers, websites, and servers; any technology based on code provides an entry point. More items and systems are at risk than ever before, ranging from airline systems and vehicle alarms to power grids and security systems.

Advent of technology: An enabler for economically vulnerable sections

Internships revamp the theoretical aspect of learning into praxis