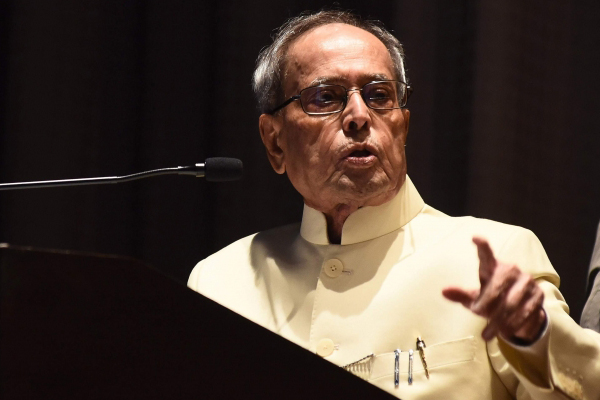 Boasting of India’s pioneer excellence in the field of Education for the past 1,800 years dating back to 6th century BC to 12th century AD with leading names like Takshshiila, Nalanda and Vikramshila, former President Pranab Mukherjee emphasised on the need of educating graduates of premier institutions like IITs to serve larger purposes in opposition to just advancing sales of detergents at multinational companies.

The 10th edition of the Indian Management Conclave on Saturday witnessed former president calling out the need of the hour to promote basic research skills among the students of this country.

Citing an example from his first year of Presidency, he recalled asking a Director during one of the convocations of an IIT institution if he knew any student who took up a career in research or education, to which the Director fumbled and replied, “He is not sure.”

“We don’t want that every year thousands of students go abroad for higher studies. Rather I want the traffic should reverse like it used to happen for over 1,800 years. Till Nalanda and Vikramshila were destroyed, India was leading in the field of higher education.”

While expressing his pride in the country’s IIT graduates, Mukherjee said, “India has a brand name. Beginning from the first five-year plan to the 12th five-year plan, we built huge infrastructure in higher education. More than 1,000 universities, 36,000 colleges, increase in the number of IITs from eight to 16, 30 NITs, scores of IIScs and also the management institutions”.

“But unfortunately in over 70 years from 1933, there has been no Nobel laureate who is doing basic research work in any Indian university. It is not the question of lack of talent, but ambience or the environment where students are encouraged for basic research. This is the most pertinent thing in education,” he added.

Citing one more example of the legendary Vashishtha Narayan Singh, a mathematician who obtained a PhD from the University of Berkeley despite coming from a poor background, he highlighted the role of teachers in encouraging research as a subject and skill among students.

“I would urge the teachers and faculty members to build such excellence,” he said.

Mukherjee lamented on the fact that no Indian university found a place in the top 200 of general ratings globally. “It is not that Indian universities are not competent, but there are certain technicalities that are followed by others which are not followed by us,” he said.

The former president added, “The world is going to be a global village, and we all will be the residents of that global village. We need to equip ourselves for the global economy by updating our skills. We have to find out new skills, new technologies and new methods that can help in the advancement of society. India is going to be the largest economy but I don’t want that economy to be stagnant.”